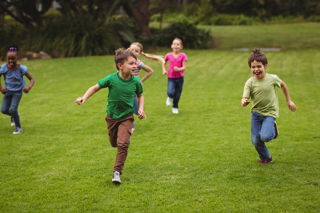 We can consider a number of troubling factors when looking at the most depressed, anxious, and suicidal generation of children: Too much screen time, obesity, social media and cyber bullying, standardized testing, and school shootings. However, another factor has been at work along the way — recess has been all but squeezed out of the school day.

Depression and anxiety include a deep feeling of lack of control or direction over one’s life. These are skills developed not in math or English class, but during unstructured and independent time play time.

Time to play and explore on their own without adult intervention allows children to develop the ability to problem solve, feel a sense of control over their lives, discover their interests, and become competent at what they’re interested in.

While childhood development researchers recommend at least an hour a day of unstructured play time, kids today are lucky to get a fraction of that today. Some schools have as little as 10 minutes twice a week, or no recess at all.

Some states are passing laws to require at least 20 minutes a day of recess for children.

The introduction of standardized testing has gradually pushed recess out of the school day. While no studies show the benefit of banishing recess, a wealth of research points to its value.

In fact, sufficient play time has been shown to actually improve academic performance and behavior. Holding recess before lunch even gets kids to eat more fruits and vegetables.

While too much screen time and too little play time is contributing to exploding rates of depression and anxiety among young people, in functional neurology we are aware of other less obvious influences.

For instance, the impact of environmental toxins on the developing brain, which begins in utero, should not be underestimated.

While the tens of thousands of primarily untested pollutants in our environment threaten everyone’s health, children and infants are most at risk.

Some toxins, such as lead and mercury, are known for their neurological effects. However, lesser known but well established are the effects of pesticides, plastics, flame retardants, and artificial additives in foods and beverages.

Beginning in utero, environmental toxins can impact on the nervous and hormonal system that ultimately lead to developmental, behavioral, and mood disorders in children.

While it’s important to minimize your child’s exposure to toxins and help them get plenty of unstructured play time outdoors, functional neurology can also help kids improve their brain health and thus alleviate symptoms of depression and anxiety.

Through a thorough neurological exam, lab testing, and patient history, we create a customized neurological rehabilitation, nutritional, and lifestyle program.

Together, these approaches can significantly improve how your child feels, functions, and performs at school. Ask my office for more advice.

Previous: Syncing meals with your body clock for better health

Next: Carbs, not fats, are the culprits behind heart disease