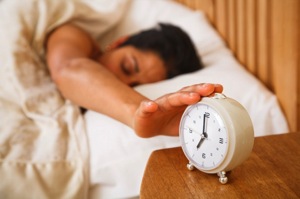 Do you curse every spring when we have to move the clocks forward for Daylight Saving Time (DST)? Does it take you weeks to recover? You're not alone. Studies show DST is hard on our health and dangerous to boot, making it an outdated relic that adds stress to an already over-stressed society.

DST doesn't just make people tired in the morning.  Studies  show the number of car accidents increases after DST, likely due to tired drivers. A Swedish study also found that the risk of heart attacks goes up the first few days after DST, and that risk drops after setting the time back to Standard Time. An Australian  study  showed an increase in suicides the first few weeks after DST goes into effect.

Some people aren't ruffled by the change in time, others recover in a few days, and then there are those for whom DST means a few weeks of feeling out of whack while their body adjusts. In fact, one  study  showed our bodies never fully adjust to DST until we switch back to Standard Time. Night owls are affected the worst, taking as long as three weeks to recover. Research has shown on their days off, people revert to sleeping and waking according to what's seasonally appropriate, not what DST dictates.

We are designed to gradually adjust to the changes in light as the seasons change. Forcing this change overnight once a year flies in the face of our internal clocks, which are tuned into nature.

The sudden disruption to our internal clocks with the time change and loss of sleep causes a loss in production, concentration, and memory, as well as fatigue and sleepiness during the day.

DST bad for business as well as health

Enacted during World War I to decrease  energy  costs, DST has now been shown to actually increase energy demands, due largely to more air conditioner use and more driving time to daylight activities. Also, contrary to popular belief, it does not benefit farmers; they actually oppose it. Dairy farmers in particular say cows do not easily adapt to the change in schedule. Orthodox religions don't like their sunrise and sunset prayer tinkered with. However, the golf, barbecue, and retail industries love it.

Broader research has shown DST costs the economy anywhere from $400 million to $2 billion due to loss of productivity, workplace injury, and "cyber loafing."

How to cope with Daylight Saving Time

If DST is wrecking you those first few weeks, you can do a few things to help ease the transition (in addition to signing an online petition to end DST):

Lay low until you adjust. Honor the disruption to your natural rhythms and take it easy by avoiding taking on extra activities or added stressors until you feel back to normal. Also, avoid dangerous activities.

Add in extra time to rest and nap. The biggest cost of DST is sleep loss, especially if you are a night owl. It is difficult to go to bed and wake up an hour earlier. Make time for a nap or at least some time to lie down and rest during the day those first few weeks.

Ask my office for advice on helping you sleep better.

Previous: Botox can mess with your brain in more ways than one

Next: Do you sometimes "crash" with debilitating fatigue?