Hashimoto’s and hypothyroidismâ€”20 percent of diabetics are "type 1.5" 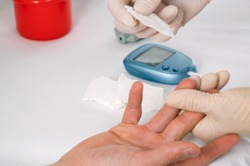 It is estimated 20 percent of people with type 2 diabetes also have an autoimmune reaction against the cells of their pancreas, prompting researchers to dub this "type 1.5 diabetes." Type 1.5 diabetes may be even more prevalent than type 1 diabetes.

Insulin resistance (pre-diabetes) and diabetes are typically linked with a long-standing diet heavy in sweet, starchy foods and processed fats, as well as overeating and a lack of exercise. This is often referred to as "adult-onset diabetes," although it's becoming more common in younger people as their obesity rates rise. In these cases a diet for diabetes would involve managing blood sugar. Type 1 diabetes, referred to as "juvenile diabetes," is an autoimmune disease in which the immune system attacks and destroys pancreatic beta cells, which produce insulin.

With type 1.5 diabetes an autoimmune reaction destroys cells of the pancreas, but the pancreas still secretes insulinâ€”autoimmune damage is not advanced enough to shut down insulin function. In type 1 diabetes, on the other hand, more than 90 percent of the insulin-producing cells have been destroyed. Because a person with type 1.5 diabetes has not sustained pancreatic damage to such a great degree he or she is often misdiagnosed.

If you have Hashimoto’s hypothyroidism it’s important to know about type 1.5 diabetes. Autoimmune management may help prevent the condition from worsening or progressing to type 1 diabetes. It can also help manage your blood sugar and your thyroid condition.

Identifying type 1.5 diabetes if you have Hashimoto’s hypothyroidism

If you have Hashimoto’s hypothyroidism and difficulty managing your blood sugar, it's worth screening for antibodies against pancreatic beta and islet cells. Additionally, some people have antibodies against the glutamic acid decarboxylase (GAD) enzyme, which is involved in the release of insulin from the pancreas. GAD is also found in areas of the brain, and an autoimmune reaction to GAD may be associated not only with a blood sugar disorder but also with such neurological symptoms as obsessive-compulsive disorder, dizziness, or problems with balance.

Type 1.5 diabetes requires managing the autoimmune condition. This means strictly avoiding immune-reactive foods, which for most people includes gluten and dairy. The GAD enzyme may cross-react with gluten so that eating gluten can stimulate an immune attack against GAD. This is especially pertinent to those with Hashimoto’s hypothyroidism, an autoimmune condition that also has been linked with gluten intolerance.

A number of nutritional compounds have been shown to regulate the immune system and dampen autoimmunity. Ask my office for advice on managing Hashimoto’s hypothyroidism and autoimmunity in general.

Previous: When your blood is drawn could affect TSH level and hypothyroidism diagnosis

Next: How to motivate yourself to exercise for better thyroid health