Do you start each morning with a cup of fear? 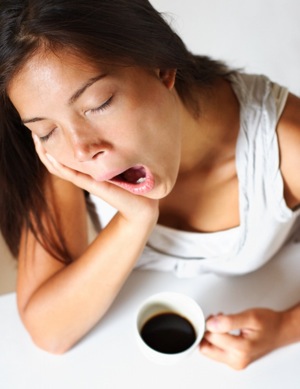 Do you start your mornings with your treasured "cup of fear?" As far as your body is concerned, that lovely and seemingly harmless cup of coffee could be tantamount to getting mugged or running from a hungry lion. The physiological reactions caused by caffeine that jumpstart you in the morning are the same reactions triggered by fear.

We are meant to feel rested and alert in the mornings. Waking up feeling like you have been hit by a garbage truck means you may have an adrenal imbalance. The adrenal glands sit atop each kidney and release adrenal hormones that help keep the body regulated during times of stress. Adrenal function also plays important roles in the sleep-wake cycle, so that you feel tired in the evening and alert in the morning, and are able to sleep soundly through the night. In fact, the health of the entire body relies in part on sound adrenal function: immune health, hormone balance, digestive operations, brain function, and more.

Depending on caffeine to get going in the morning is a sign the delicately orchestrated relationship between the adrenal glands and the rest of the body is out of balance. A morning cup of coffee stimulates the adrenal glands to release "fight-or-flight" adrenal hormones. This raises your heartbeat, dilates your pupils, tightens the muscles, raises your blood pressure, slows blood flow to the stomach, and releases glucose into the bloodstream. Together these effects on the central nervous system boost energy. The body designed this response to help us get out of a dangerous situation by either running or fighting. However, these days, many use the same response just to get ready for work each morning.

The downsides of coffee on health

As many know, giving up coffee is hard and can come with unpleasant withdrawal symptoms. This is partly because caffeine also stimulates the release of dopamine, a neurotransmitter that activates the "pleasure and reward" centers in the brain and is associated with addiction. This also means over time you need more caffeine for the same effects.

For the person suffering from adrenal dysfunctionâ€”producing too little or too much of adrenal hormoneâ€”caffeine can intensify your adrenal problems. Although it gives you energy, it's a short-term fix with long-term consequences making an existing problem worse. In addition to taxing adrenal function, caffeine can cause sleep problems, irritability, anxiety, and high blood pressure. It's also a diuretic that can deplete you of important minerals and electrolytes. A trap many coffee drinkers fall into is that the coffee makes them sleep poorly and they feel terrible in the morning. So they drink coffee to get them going, which again makes them sleep poorly, in a self-perpetuating vicious cycle that gradually worsens adrenal function.

Restoring adrenal function is foundational to managing many health issues in functional medicine, including chronic disease, autoimmune disease, hypothyroidism, obesity, blood sugar imbalances (insulin resistance or hypoglycemia), and other disorders. When you are working on restoring your health from these conditions, coffee can work against your efforts.

This isn't to say coffee is all bad. Although some studies show negative consequences from caffeine, others show its benefits. As with many things in health, it is something that must be considered on a case-by-case basis. If your adrenal and blood sugar function is healthy (you do not suffer from insulin resistance, diabetes, low blood sugar, adrenal fatigue, or hyper adrenal function), moderate consumption of organic coffee may be fine for you.

Ask my office how we can help you restore your adrenal function and kick your dependence on coffee to function.

Next: Could your chronic pain, chronic fatigue, or other symptoms be autoimmune?