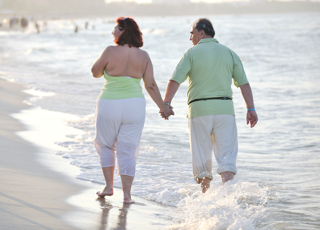 For some people weight loss is pretty straightforward: They just need to cut out sodas and sweets and hit the gym regularly. For others, especially those with a chronic health disorder, weight loss remains elusive despite and weight gain happens far too easily despite doing everything right.

Weight gain and weight loss resistance are very common symptoms among people with chronic health disorders. Contrary to popular belief, an inability to lose weight or keep it off is not a sign of a character flaw but instead flaws in your metabolic, immune, or neurological health.

Fat shaming is culturally accepted, particularly in the alternative health spaces and against women. The truth is, overweight and obese people may have some of the healthiest diets and lifestyle practices you’ll encounter. They have to — should they dare to eat “normally” they would quickly balloon out of control.

Instead of beating yourself up if you can’t lose the weight or you have mysteriously gained it too easily, consider if any of the following underlying causes may apply to you.

1. You are a veteran lifelong dieter. The multi-billion-dollar diet industry coupled with unrealistic cultural body image standards have turned low-calorie dieting into a way of life. That works great in your youth, but as you age your metabolism fatigues from constant famines.

The human body responds to famines by progressively lowering metabolism and increasing fat storage hormones. As a result, each low-calorie diet can make you a little bit fatter than the last one once you resume normal caloric intake. This explains why diets have such low long-term success.

This phenomenon was most poignantly illustrated in a study of participants from the The Biggest Loser reality TV show. Six years after participating in the show, researchers found they were burning 800 fewer calories per day and the majority of them returned to their pre-show weight and had to under eat by 400–800 calories a day just to not gain weight.

2. Your hunger hormones are out of whack

One of the most common causes of weight gain and weight loss resistance is hypothyroidism, or low thyroid activity. And the most common cause of this is Hashimoto’s, an autoimmune disease that attacks and damages the thyroid gland. This is why many people do not lose weight even after they start taking thyroid medication. It’s important to address the underlying causes of Hashimoto’s hypothyroidism to improve your health and lose weight.

4. You are chronically inflamed

5. You’ve had a brain injury or have compromised brain function

Many sufferers of concussions and brain injuries find they suddenly gain weight after their injury and are not able to lose it. Brain injuries cause inflammation in the brain, which can not only impact brain function, but also disrupt metabolic, hormone, and immune in a way that promotes promotes weight gain and inhibits fat burning. Brain injury victims also often struggle with fatigue, exercise intolerance, depression, and other symptoms that interfere with appropriate fat burning and storage.

6. You have mold illness

Mold illness is increasingly being identified as an underlying cause of many health disorders and symptoms, including weight gain and weight loss resistance. Almost a quarter of the US population is susceptible to mold illness. Toxicity from mycotoxins, the byproducts of molds, can seriously impact metabolic, immune, and neurological health leading to unexplained weight gain and weight loss resistance. This refers not just to the dreaded black mold but also the more commonly found strains of mold caused by leaks and water damage in buildings.

7. You were born with an obese gut microbiome

Research into the gut microbiome, our trillions of gut bacteria, show they impact virtually every aspect of our health, including whether we are more likely to be thin or heavy.

Studies on both mice and humans have shown that obese subjects inoculated with the gut bacteria of thin subjects went on to quickly and easily lose weight.

Factors that impact your gut microbiome “signature” in a way that promotes obesity include being delivered via C-section, being formula fed versus breastfed, and frequent antibiotic use in childhood.

8. You are a victim of childhood sexual abuse or sexual assault or have PTSD

After more than two decades of trying to understand why most obese people regained the weight they lost, an obesity researcher made an accidental discovery — the majority of his study subjects had been sexually abused as children or sexually assaulted right before the time their weight gain began. This can drive complex PTSD and the genesis of a food addiction to cope.

Likewise, researchers have found a correlation between food addiction and PTSD in women.

9. You have a brain-based disorder that promotes food addiction and an eating disorder

I hope this article helps you understand some of the factors that play into a chronic struggle with weight gain and weight loss resistance. Our society begs us to gorge on eat sugary foods and drinks through incessant advertising while a multi-billion-dollar diet industry and impossible pop culture body ideals value human worth based on thinness.

The result is millions of people, the majority of them women, internalize society’s fat shaming and develop shame and self-loathing around food and their bodies when the real sickness is in the society and not the individual.

The body is a miraculous machine that operates in constant service to us. You can learn to live and eat in a way that honors good health and function regardless of your size. Ask my office how we can help you.

Next: Your gallbladder can cause gut and health problems