Why are girls starting puberty so early these days? 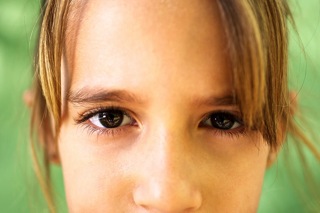 In the 1800s the average girl didn't hit puberty until she was 15. Today the average age of  puberty  is 12, while the numbers of children showing signs of puberty before age 10 is at all time high and rising. We have seen the age at which children, primarily girls, hit puberty drop in just the last generation.

The  numbers  are startling. Breast development and other signs or puberty are starting by age 7 in 10 percent of white girls, 15 percent of Hispanic girls, and 23 percent of black girls.

Early puberty not only may cause emotional pressures, but also may raise the risk of breast and ovarian cancer due to longer exposure to estrogen. Studies link early puberty with increased behavioral and mood disorders, low self-esteem, early sexuality, and increased risk of health disorders.

Why are girls going through puberty so early?

The research points to the abundance of estrogen-like chemicals in our environment and obesity as factors driving early puberty.

We live in an environment saturated with synthetic chemicals. They are in our air, water, food, household products and body products. Only a handful of tens of thousands of chemicals have been studied; we only learn about their effects after the fact. Researchers have drawn many links between environmental chemicals and reproductive hormones.

For instance, in 1973  cattle  in Michigan were accidentally fed grain contaminated with flame retardant, which mimics estrogen. The daughters born to pregnant women who consumed meat and dairy from these cattle started puberty significantly earlier than their peers.

Chemicals that mimic estrogen include pesticides, flame retardants, BPA (in tin cans, baby bottles, toys, and other food packaging), phthalates (in cosmetic products, PVC, plastics, food packaging, and numerous products), and parabens (in shampoos and cosmetic products). Phthalates have also been linked with abnormal hormone development in boys, and prenatal exposure to these chemicals has also been identified as a risk factor.

One study showed 90 percent of infants tested showed BPA in their cord blood, meaning this is a problem that can start before a child is even born.

These  chemicals  are tied not only to early puberty, but also to multiple health disorders, including reproductive cancers.

Although we can't totally escape these chemicals, it's important to restrict their use as much as possible in your home and in your diet (i.e., don't use cleaning or body products with synthetic chemicals and avoid drinking or eating from plastic containers).

A diet high in sugars and processed carbohydrates can raise the risk of early puberty through chronic insulin surges, especially in ethnic populations more prone to diabetes and obesity.

Estrogens in foods and early puberty

It's not just about obesity but also estrogenic chemicals in foods. For instance, one  study  showed infants fed soy formula had estrogen levels 13,000 to 22,000 times higher than normal (soy is a known estrogen mimicker). Also, sex hormones are given to beef and dairy cattle, and the  antibiotics  given to animals may be a factor.

Other factors linked with early puberty

Previous: Hashimoto’s not improving? Here are 10 reasons why

Next: What HbA1c and a glucometer can tell you about disease risk

Herbal remedies and supplements have been used for centuries to help manage the symptoms of PCOS. Some of the most commonly used herbs and supplements for PCOS include: Vitex agnus-castus (chasteberry): This herb is believed to balance hormones and regulate the menstrual cycle. It is often used to help alleviate symptoms such as irregular periods […] Read more