Your spouse: The biggest barrier to a gluten-free diet for your Hashimoto’s hypothyroidism? 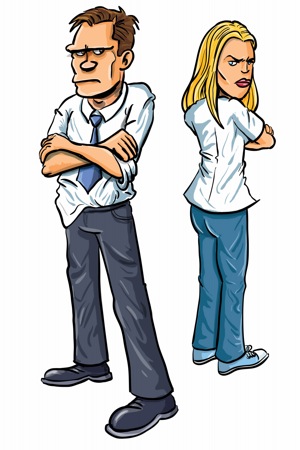 You swore to support each other in sickness and in health, yet when it comes to a gluten-free diet to manage your Hashimoto’s hypothyroidism, you may have found your spouse to be your biggest barrier to success.

Spouses complain that eating gluten free is too expensive and too restrictive, they tell you that you're making a big deal about nothing, or perhaps they simply cannot imagine life without those staples of Western civilization, bread and pasta. Whatever the reason, spouses are often one's greatest saboteur when it comes to maintaining a gluten-free diet.

Gluten-eating spouse sabotaging gluten-free diet for you or the kids?

Their transgressions can be maddening. They order pasta with garlic bread in front of your newly gluten-free children, who proceed to cry through the rest of the meal. They dip their knife into your gluten-free mayonnaise after having used it on their whole wheat bread. They don't read labels, feed the kids something with gluten in it, and then go off to work while you're left at home to deal with your children's stomach aches or behavioral outbursts.

Sometimes a spouse's stubbornness unearths dormant marital discord that may require attention. Or the new gluten-free dieter must become assertive and demanding for the first time in the relationship, which can rattle spousal dynamics. But given that gluten is linked to not only Hashimoto’s hypothyroidism, but also 55 known diseases and many neurological issues, going gluten free is worth the fight.

The first spouse to go gluten free is often the wife.  The hormonal upheavals of pregnancy and childbirth can trigger Hashimoto’s hypothyroidism or other autoimmune or inflammatory conditions, necessitating a gluten-free diet and other changes.

Also, because moms usually spend more time caring for and feeding the children, they are more apt to notice to health issues that require dietary action.

So how does one win over a reluctant spouse to support a gluten-free diet?

Patience, persistence, education, and even the willingness to nag are the ticket, say those who've done it.

Given enough time on a gluten-free dietâ€”even if it's initially against their willâ€”even the most stubborn of spouses may see the light. For instance, when the wife and kids are eating gluten free at home, the husband can get his gluten fixes only when eating out. During such a gradual weaning, some are amazed to find they also suffer from a gluten intolerance. One husband discovered gluten to be a trigger for his canker sores and migraines. The chronic back pain and depression of a spouse magically lifted on a gluten-free diet. Others find they are more energetic and clear-headed. Someone doesn’t have to have Hashimoto’s hypothyroidism to benefit from a gluten-free diet, and when everyone eats the same diet, it makes managing meals easier.

You, too, may find that your resistant spouse not only becomes more supportive of your Hashimoto’s hypothyroidism diet, but also embraces the diet as his or her own.