Brain plasticity: “Use it or lose it” to stay sharp 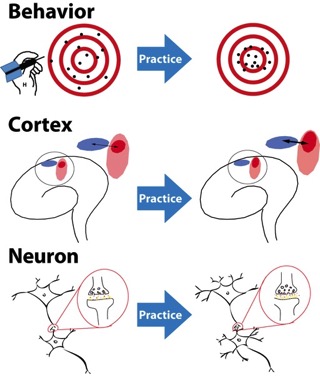 Brain cells, or neurons, are similar to muscles in that they are subject to the same basic “use it or lose it” principle to stay healthy well into old age.

Although genetics play a role in how well our brains age, the brain also responds profoundly to dietary and lifestyle influences. Although the brain loves healthy food and regular exercise, it also needs ongoing stimulation to stay vital.

As we go through life we constantly lose neurons as a normal part of aging. Some people show this decline through loss of memory and slower mental speed. However, some stay sharp and lucid, even when autopsy results show all the signs of Alzheimer’s.

Why? Although they may have fewer neurons, the neurons they do have communicate efficiently with one another.

A healthy neuron receiving plenty of stimulation branches into other neurons to improve communication. For instance, if you learn a new skill, whether it’s tennis or French, the neurons involved in that develop more and more efficient communication pathways between one another so the skill becomes easier for you. This helps you learn new things and become more efficient at the things you already know.

Because the brain runs the body, healthy plasticity is also good for your organs, cells, and hormone function. An active brain that fires regularly likewise stays better connected with the nerves throughout the body so operations run more smoothly. This can help keep prevent things like high blood pressure, dry eyes and mouth, incontinence, digestion issues, and other function regulated by the autonomic nervous system.

Although the brain responds well to stimulation, don’t overdo it. Over stimulation fatigues neurons and can make you “crash.” If you fatigue easily doing mental tasks, work on gradually building your brain endurance without crashing.

For plasticity to work, the brain needs a healthy environment supported by appropriate blood sugar levels (not too high or too low), good blood flow, and good neurotransmitter activity. Neurotransmitters are brain chemicals that facilitate communication between neurons. The most well known neurotransmitter is serotonin, which plays a role in happiness or depression.

Just as plasticity can be healthy, so can it be unhealthy. Negative plasticity makes you more efficient at things that are harmful, such as stress, pain, and bad habits.

Post-traumatic stress disorder (PTSD) is an example of negative plasticity. PTSD is basically the brain becoming highly skilled at stress. Eventually it becomes so efficient at stress that the slightest trigger — a loud sound, flash of bright light, crowd of people, or a strong emotion — sends it into a fight-or-flight tail spin.

As this cycle takes root it actually changes the shape and neurochemistry of the brain to make it highly reactive to stress. This is why PTSD is so difficult to simply “turn off.”

Fortunately, many functional neurology approaches can help rewire the brain to be more directed toward positive plasticity rather than negative. Ask my office how we can help.

Previous: Travel tips to prevent autoimmune flares on the go

Next: What your gut bacteria need to eat to survive and thrive