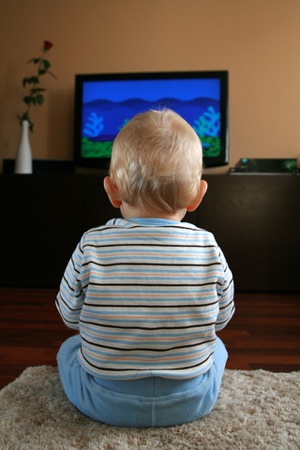 Popping in a DVD for a baby or toddler can provide a brief but blessed break for the harried parent, and playing an educational video takes some of the sting out of the guilt. Unfortunately, even an educational video featuring classical music, shapes, colors, and early words may do more harm than good according to researchers.

A child's brain needs constant physical activity and interaction with the environment to develop properly, and time in front of the screen suspends that development, even if it's an educational video or computer game.

Research shows the younger a child begins spending time in front of the screen, the lower they score on language tests, despite being taught language on educational videos or television. Unfortunately, almost 90 percent of children spend two to three hours per day in front of a screen by the time they are two years old.

Moms who have Hashimoto’s hypothyroidism or other autoimmune diseases should pay attention to healthy ways to support brain development. The mother’s immune health plays a significant role in the development of her baby’s brain and healthy stimulation is vital to proper development.

A parent who wants her child to read or learn numbers early overlooks some basics of brain development. The timing of left and right hemisphere development is of utmost importance during these first years of life.

A child's right brain is dominant through about age three. The right brain governs the ability to read emotions, see the big picture, intuition, creativity, and imagination. Experts say teaching more left-brained activities, such as language, critical thinking, logic, and math is not appropriate during this critical right-brain period of development.

In fact, childhood brain issues such as ADHD or autism spectrum disorders reflect lopsided growth of the hemispheres, with the left brain often dominating a weaker right brain. This explains why these children may be academically gifted but have difficulty with such right-brain tasks as reading social cues. Immune imbalances such as an unmanaged autoimmune Hashimoto’s hypothyroid condition can create an environment in the uterus that fosters over development of the left brain.

Although watching educational TV or videos won't necessarily cause a brain development disorder, experts say it can delay the development of crucial wiring and even delay language development.

Physical activity and healthy interaction with the environment are the most vital aspects to a properly developing brain. Babies and toddlers do not need traditional education on TV and videos. Simply becoming part of the world around them is highly educational for them. Ample access to physical movement appropriate for the child's age (i.e., do not put a child who should be learning to crawl in a walker or leave her strapped in a car seat for much of the day) is vital for proper brain growth, as is playing with age-appropriate toys, loving interaction and touch from caregivers, the ability to safely observe and explore his world, and protection from overstimulation.

Although the early years of life are critical to brain development, brain health starts in the womb and is significantly affected by the mother's health (and, according to newer research, the father's ageâ€”children of men older than 50 are significantly more likely to have autism). Autoimmune diseases such as Hashimoto’s hypothyroidism, chronic inflammation, inflammatory disorders, allergies, and food intolerances can affect the fetal environment and brain development.

To maximize a baby's brain power, both parents should start with functional medicine principles before the baby has even been conceived. These include stabilizing blood sugar, eliminating foods that cause inflammation, detoxification, balancing hormone, adrenal, and repairing the gut, which is the seat of the immune system.

Although thyroid medications may be necessary, they do not address the underlying mechanism of Hashimoto’s hypothyroidism, which is an autoimmune reaction and immune imbalance.

Ask my office for tips on how best to support Hashimoto’s hypothyroidism nutritionally prior to conception, during nursing, or after your baby is born.

Next: Hashimoto’s hypothyroidism sufferers: Why sleep is more difficult for women