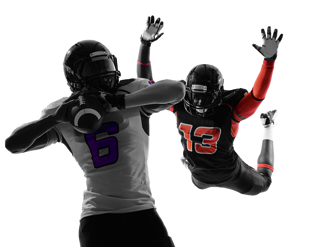 The first case of CTE, or chronic traumatic encephalopathy, was identified in NFL player Fred McNeill and confirmed after his death in 2015. However, CTE, which causes brain degeneration and dementia, is not confined just to football players. Anyone whose body receives repeated blows is at risk. This includes boxers, wrestlers, MMA fighters, extreme athletes, military troops, and more. You don’t even have to receive a concussion for your brain to suffer injury and damage from repeated falls, crashes, and body slams.

A recent study of the brains of deceased NFL players showed 110 out of 111 had CTE disease, a bitter pill for a sport that is a staple of American culture.

The CTE in McNeill was discovered by Dr. Bennet Omalu, the subject of the 2015 Will Smith movie Concussion,about the NFL’s attempts to suppress Omalu’s CTE research findings.

A former NFL player and top attorney, McNeill started to devolve in his 40s into an explosive, depressed, forgetful, and impulsive man who drove his family into bankruptcy and could no longer hold a job. He died of ALS at age 63.

Omalu scanned McNeill’s brain several years prior with a diagnostic exam he developed that identifies the spread of tau protein clumps on a PET brain scan.

Tau proteins help provide structure to the brain’s neurons so they can communicate effectively with one another. When the brain is repeatedly knocked about, either from direct hits to the head or from crashing around in the skull, tau proteins come loose, change shape, and clump together. Eventually they take on a life of their own and spread to other areas of the brain.

Omalu’s diagnostic exam identifies the pattern of tau’s spread that is unique to CTE. Because this spread of tau clumps is so gradual, it explains why symptoms show up years after the initial damage.

The role of functional neurology in brain health

While scientists are working on ways to prevent the spread of tau proteins that leads to advanced brain degeneration and dementia, functional neurology and neurochemistry offers many hopeful possibilities.

Unlike the rest of the body, the brain does not have an off switch for inflammation after an insult. Inflammation can continue as a slow burn through the brain, damaging tissue as it goes. When you throw in repeated injuries through contact or extreme sports, it may never get a break and the damage continues long after the sports stop.

If you haven’t been the same since your head injury, football days, or extreme sports lifestyle, call for a consultation.

Previous: Cannabinoid receptors: How to activate them without cannabis