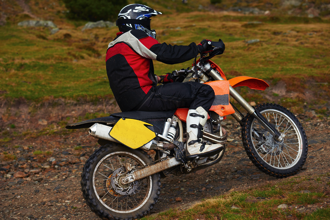 The suicide of BMX legend Dave Mirra this year has forced an uncomfortable topic to surface — many extreme sport athletes, and the adolescents and weekend warriors they inspire, face a higher risk of long term brain disorders due to repetitive crashes and hits to the head. Suicide rates, for instance, are three times higher in people who have suffered concussions. Other symptoms include mood disorders, bouts of rage, sensitivity to light and sound, fatigue, poor concentration, memory loss, depression, anxiety, impulsiveness, addiction, poor balance, and migraines.

The renegade nature of extreme sports means long term risks of repetitive head injuries are not tracked like they have been in football. From football we have learned that CTE, or chronic traumatic encephalopathy, is a degenerative brain disease caused by repeated head traumas that leads to significant problems later in life. Autopsies of the brains of 94 former professional football players showed 90 of them had CTE.

You don’t have to have a concussion to sustain brain injury. And while wearing the best helmet may prevent a skull fracture, it doesn’t protect the brain from impact within the skull during a crash after catching big air or face planting on concrete. Twisting, rotation, acceleration, deceleration, and damage to the neck, spine, and inner ear (vestibular system) also impact brain function.

Not only do these accumulated traumas, both micro and macro, progressively damage the brain, they also foster the development of tau proteins and neurofibrillary tangles, the markers of Alzheimer’s disease.

Functional neurology has treated its fair share of extreme sport athletes. Perhaps one of the bigger tragedies among the sports world is the idea that nothing can be done for head injuries beyond rest.

In functional neurology, we know this is far from the case. Not only do we have patient experiences to back this up, but we also have peer reviewed studies on brain inflammation and brain rehabilitation.

Brain injuries inflame the brain. However, this inflammation may not turn off, continuing to damage brain tissue like a slow spreading fire. Some people suffer more than others from brain inflammation due to their diet, food intolerances, hormone imbalances, blood sugar regulation issues, chronic infection, pre-existing brain development disorders (such as ADHD), and so on. The factors that lead to Alzheimer’s disease are the same factors that respond to brain inflammation, which is why it’s suggested brain inflammation increases the risk of Alzheimer’s.

Also, instead of prescribing blanket treatments for brain injury, we perform thorough examinations to see which areas of the brain are damaged. This includes examining the function of the inner ear, or vestibular system, the fragile system of canals that play a large role in brain function and are easily damaged during impacts. Rehabilitation and nutritional therapy are then customized to target the specific areas of brain compromise.

By quickly addressing brain health after a concussion, a crash, or a series of crashes that seems to have robbed you of “you,” you can significantly rehabilitate your brain and dramatically lower your risk of bigger problems in the future, including suicidality and dementia.

As for continuing in extreme sports, that is an individual decision. In the age of GoPro cameras, high-tech gear, viral videos, and fierce competition for few paying gigs, athletes are encouraged to go bigger, faster, and higher with ever increasing risks.

Baseline testing and repeated follow ups will give you a clear indication of whether your lifestyle is damaging your most vital organ. Also, following an anti-inflammatory diet and other brain health lifestyle strategies give the brain its best chances. Ask my office for more advice.

Previous: Stress can cause PMS, menopause problems, and more

Next: Mystery symptoms autoimmune? How to find out