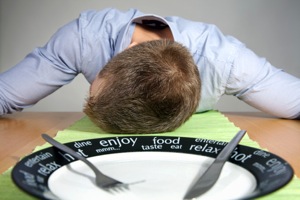 Do you feel sleepy or have intense cravings for sugar after meals? Are you a woman whose hair is thinning, yet you're growing facial hair? Are you a man who cries at movies and has "moobs" (male breasts)? If so, you probably suffer from insulin resistance. Not only does insulin resistance gender bend your hormones, research shows it also raises your risk for dementia and Alzheimer's.

Insulin resistance also promotes inflammation, which can exacerbate symptoms of hypothyroidism caused by Hashimoto's, an autoimmune disease that destroys the thyroid gland.

What is insulin resistance?

A high-carb, high-sugar diet consistently raises blood sugar levels, which in turn requires the body to secrete high levels of insulin to lower blood sugar. Eventually these insulin surges exhaust the body's cells, which then refuse entry to the insulin, causing insulin resistance. Insulin resistance brought on by high blood sugar arises from eating a diet that is high in sweets, soda, and starchy foods such as breads, pasta, rice, corn, potatoes, etc.; a habit of overeating; and living a sedentary lifestyle.

The link between insulin resistance and Alzheimer's

Insulin resistance has long been linked with many common health conditions, including obesity, heart disease, type 2 diabetes, high blood pressure, and hormonal imbalances. More recently, researchers have discovered that it also increases the risk of dementia and Alzheimer's. In fact, the link is so well established that some researchers refer to Alzheimer's as "type 3 diabetes". This is because a high-carbohydrate diet has the ability to accelerate brain degeneration and cause dementia.

The link between insulin resistance and Hashimoto’s hypothyroidism

Insulin does more than regulate blood sugar in the body. Appropriate levels of insulin in the brain manage glucose levels for sustained mental energy. In turn, this regulates inflammation and helps produce brain chemicals that regulate mood.

The insulin surges and insulin resistance that result from a sugary, high-carbohydrate diet raises inflammation in the brain and disrupts the brain's ability to perform even simple operations.

For many people, insulin resistance eventually becomes type 2 diabetesâ€”the body's ability to regulate blood sugar has broken down. Moreover, studies have demonstrated a clear link between diabetes and an increased risk of Alzheimer's and dementia.

Don't wait until it's too late

Both insulin resistance and type 2 diabetes often can be reversed by changing your diet and lifestyle. So, it's best not to wait until you have developed dementia or Alzheimer's to take action. While a low-carb, ketogenic diet has been shown to be beneficial to those with dementia and Alzheimer's, it is also key to prevention.

This diet is also very beneficial to managing Hashimoto’s hypothyroidism and other autoimmune diseases.

Some of the most powerful tools to prevent dementia and Alzheimer's are, unsurprisingly, the same tools that can reverse insulin resistance. These include:

There’s another reason to manage your blood sugar if you have Hashimoto’s hypothyroidismâ€”research shows women whose TSH is above 2.1 mIU/L had a more than two-fold greater risk of developing Alzheimer’s, even if they were on thyroid medication. Ask us how we can help you manage the underlying cause of your hypothyroidism so you not only can feel better but also reduce your risk of Alzheimer’s.

Next: Positive thinking helpful in coping with, but perhaps not “curing,” Hashimoto’s