Gut bacteria may play a role in eating disorders 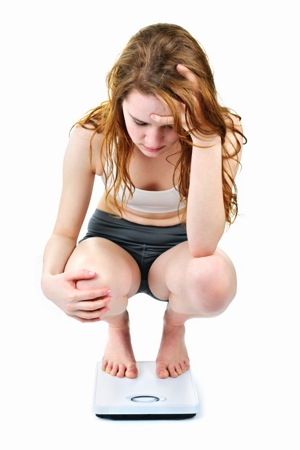 Eating disorders affect an estimated 5 to 10 percent of the population and are generally thought to be a psychological disorder. However, new  research  from France shows gut bacteria can also play a role in causing eating disorders. The study showed eating disorders developed in mice who had an immune reaction to a protein made by gut bacteria. Basically they reacted to these proteins as if they had an allergy or sensitivity to them. The protein made by the gut bacteria is very similar in structure to a satiety hormone called alpha-Melanocyte-stimulating hormone (a-MSH). When the immune system reacts to the protein it reacts to the a-MSH too because they are so similar. This reaction causes the immune system to attack a-MSH, which regulates feeding, energy usage, and anxiety.

Mistaken identity and friendly fire by the immune system

When a pathogen, such as infectious bacteria, is similar to a tissue or hormone in the body and the immune system can't distinguish between the two and attacks both, this is called cross-reactivity. It is a very common cause of autoimmune reactions. For instance, gluten, the protein in wheat, cross-reacts with tissue in the brain. Many people with gluten sensitivity develop  neurological disorders  because when the immune system attacks ingested gluten it attacks the brain too, confusing it with gluten. The same holds true for dairy and some cases of type 1 diabetes, and other foods and autoimmune diseases. This study opens the door to the possibility that eating disorders may have an immune component at their root driving the psychological disorder.

Ways to address an unhealthy relationship with eating nutritionally

Although serious eating disorders are complex and require intensive therapy, certain nutritional strategies can help you obtain a more balanced approach to eating and food. The key is to follow a diet that fosters healthy brain chemistry.

Eliminate processed carbohydrates from your diet as they are  addictive  and skew brain chemistry in the way other addictive substances do. This can foster an unhealthy relationship with food.

Eating to keep blood sugar stable is a vital component to curbing cravings, obsessions with food, and a constant feeling of hunger. Avoid sweet, starchy foods, coffee drinks and energy drinks, going too long without eating, and relying on coffee for breakfast. Many people need to eat small, protein-dense meals frequently in the beginning to stabilize blood sugar.

It's also important to base your diet on plenty of vegetables â€” research shows a plant-based diet affects the composition of  gut bacteria  and affects energy usage and fat storage in a way that promotes being slender naturally â€” without having to obsess over it.

Supporting your neurotransmitters, brain chemicals that affect mood and brain function, can also help you stabilize your approach to eating. Your brain may need serotonin or dopamine support. Serotonin is important to feel joy and ward off depression, while dopamine support may be helpful to feel motivation and ward off cravings. Both have been shown to play a role in  eating disorders.

Ask my office for more advice on how to support a healthier approach to balanced, obsession-free eating.

Previous: Teens need enough sleep as much as they need air, water, and food