Teens need enough sleep as much as they need air, water, and food 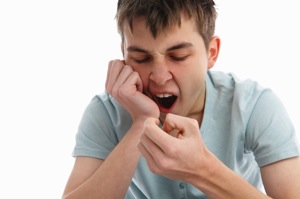 Teens burn through life because, well, they can, and  research  shows two out of three teens are severely sleep deprived. But what teens and the adults in their lives don't realize is that sleep deprivation raises the risk of car accidents and driving fatalities (driving sleepy is as bad as driving drunk), obesity, diabetes, depression, risk-taking behavior, and suicidal ideation. It also raises the risk of the very adult diseases of high blood pressure and heart disease.

Teenagers need at least 8.5 to 9.5 hours of  sleep  a night and research shows only a small minority meet that requirement. The rest are short changing themselves by two or more hours a night, a significant loss to a body and brain that are still developing and need that precious downtime to rest, regenerate, and grow.

Lack of sleep not only raises health risks but it also robs teens of cognition, good mood, optimal well-being, and even safety. One study showed that the driving accident rate among teens was 41 percent higher in a school that started at 7:20 a.m. than a nearby school district where classes began at 8:40.

Sleep deprivation in teens has been linked to a threefold increase in  suicide attempts  as well, and depression goes up with sleep loss. Another startling finding showed that for each hour of sleep lost, the odds of obesity goes up  80 percent.

Not only do teenagers need more sleep than adults, their internal sleep-wake cycle shifts by as much as two hours after puberty, making it harder for them to fall asleep early. A teenager who manages to fall asleep by 11 p.m. â€” already a long shot â€” should not be getting up until 8 a.m. It's no wonder so many teachers say their students are "useless" during morning classes. Adding to the problem is that many teens are overscheduled, with sports, dance, jobs, and other activities running late into the night before homework has even started.

Another impediment to sleep, and one that parents didn't have to grapple with when they were teens, is the intrusion of smart phones and other screens. Texting and social media compel teens to keep each other up, as can video games and favorite shows on tablets and TVs. Not only do these devices distract teens from getting to bed on time, the blue light emitted from such screens suppresses  melatonin,  the sleep hormone. An electronics curfew each night can help teens get more sleep.

Teens typically spend the weekends getting caught up on sleep, which, unfortunately, throws their internal clocks out of whack and can promote a jet lag state that makes for brutal Monday mornings.

Ask my office about nutritional and dietary support that can help bolster your and your teen's attempts to get enough sleep.

Previous: BPAs in store receipts can trigger autoimmunity and other health issues

Next: Gut bacteria may play a role in eating disorders