How gut bacteria make you thin or fat 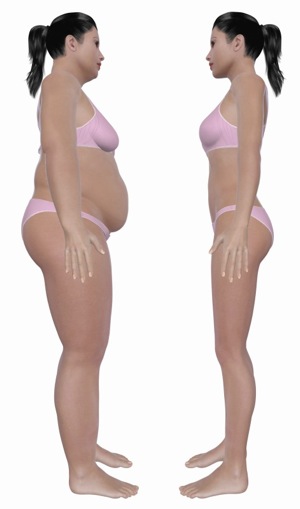 Obesity has long been blamed on laziness and lack of will power, but exciting new research shows the composition of your gut bacteria, which may have been set since birth, can play a deciding role in whether you're thin or fat. In mice studies, mice that received bacteria from an  obese person  became obese. What's more exciting is mice studies show that transplanting bacteria from  thin humans  into obese mice causes the obese mice to lose weight. This is a promising discovery for those who cannot lose weight despite diet and exercise.

It appears these bacteria affect the mechanisms that promote leanness, one of the more notable being insulin sensitivity. Insulin resistance is typical in obese people. The most common culprit is a diet high in sweets, soda, and starches (breads, pasta, rice, corn, potatoes, etc.) This diet consistently raises blood sugar levels, which in turn requires the body to secrete high levels of insulin to lower blood sugar. Eventually these insulin surges exhaust the body's cells and they refuse entry to insulin. Insulin resistance promotes chronic hunger, obesity, inflammation, and a host of other health disorders.

It also appears the gut bacteria in obese people are more efficient at breaking down and  absorbing food, particularly  fat, so that obese people obtain more calories from their food and put on fat more easily. Likewise, eating more calories promotes the growth of these particular bacteria. Obese people also have fewer bacteria that promote an  anti-inflammatory  effect than do thin people.

In studies the bacterial switcheroo is performed through fecal transplants, an approach that has also proven beneficial in treating  Clostridium difficile infections. However, scientists are working to identify and isolate the specific bacteria that affect weight so that fecal transplants, the idea of which makes most people squeamish, are not necessary.

The weight-loss effect of transplanting thin bacteria was shown to work only when accompanied by a  high-fiber, lower-fat diet   which affects bacterial composition in the gut. It has also been shown a healthy, whole foods diet based on plant fiberâ€”vegetables primarilyâ€”can help promote the growth of "thin" bacteria in humans as well.

Eating a plant-based diet that emphasizes vegetables not only provides more vitamins, minerals, and fiber, but these studies show it also fosters the composition of gut bacteria to promote leanness and prevent obesity.

Previous: How to prevent chemical sensitivities, or TILT

Next: Gluten can cause depression, anxiety, brain fog and other brain disorders