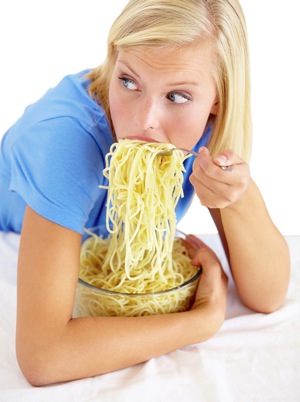 Scientists may have confirmed what millions of us could have already told you: One cookie is too many and 20 are not enough. Many people have found they can go along comfortably on a diet free of sweets, pastries, and desserts until they have that one bite. Thenâ€”zing!â€”the addiction sets in and you feel like you might die if you don't eat more. Turns out you’re not weak or gluttonous, it's just your brain responding to the highly pleasurable and stimulating effect of cookies, cake, chips, and candy as if they were powerful drugs (which, really, they are). It's no mystery why they're also referred to as comfort foods.

These processed carbohydrates appeal to the same parts of the brain involved in substance abuse and addiction, as anyone with a  carb addiction  can tell you. A major player in addiction is the neurotransmitter dopamine, which gives us the feeling of reward and pleasure associated with activities that can be addictive. For instance, drug use, smoking, and gambling all release dopamine. In rat studies, rats given the option of pressing a lever that stimulates dopamine's pleasurable effects or a lever for food chose the  dopamine  to their death.

In the recent study, researchers gave two groups of overweight men a milkshake. One group's milkshake was higher on the glycemic index than the other group's. This means it was sweeter and more processed, causing blood sugar to rise more quickly and then crash. Then four hours later researchers scanned the brains of both groups using an MRI.

The men receiving the high-glycemic milkshake felt excessively hungry and scans revealed intense activation in the area of the brain involved in addiction. These brain changes can trigger overeating.

Avoiding triggering the pleasure centers of your brain with food is one of your most powerful allies in healthier eating and weight loss. Eating a whole foods diet that is satiating and prevents hunger is key to curbing cravings and taming carb addiction. This means including healthy proteins and fats to stabilize your blood sugar and sustain your energy, as well as plenty of vegetables for the fiber, which also helps keep your energy on an even keel.

High-glycemic foods  that can trigger carb addiction include:

Ask my office for more strategies on how to turn off carb addiction in your brain.

Previous: Why menopause and midlife can cause sleep apnea

Next: Six interesting and healthy ways to enjoy pumpkin this season