Why you should avoid GMOs if you have Hashimoto’s hypothyroidism 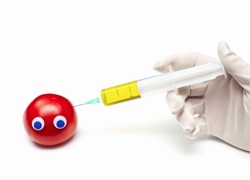 Unless you live under a rock, you’ve probably been hearing about GMOs, or genetically modified organisms. What is the big deal with GMOs, and can they really be that bad for you if the government allows them in our food supply? Sadly, yes, GMOs really are that bad for you despite being legal in the United States.

A GMO food has had its DNA altered through the insertion of genes from another species of plant, animal, bacteria, or virus.

Why GMOs are dangerous if you have Hashimoto’s hypothyroidism

Common GMO crops include soy, corn, canola, cottonseed, and sugar beets. Genetic modification creates new proteins the human body has never before encountered. As far as the body is concerned, these new proteins are not food but instead dangerous pathogens to be attacked, destroyed, and removed. This creates inflammation, which if chronic can lead to a long list of health conditions.

For instance, an increase in allergies has been shown in populations after GMO foods are introduced, as well as in farm workers who handle the GMO foods. Animal studies show GMO foods can trigger reactions to a wide range of other foods.

GMOs are legal in the United States because of the dearth of studies on humans. The only research on humans shows that GMOs transfer into the bacteria that reside in the gut, which should be cause enough for concern. This means that long after you have eaten a GMO food its foreign proteins could stay behind in your gut, with unknown outcomes.

For instance, if a food is modified with an antibiotic, it could create an antibiotic-resistant strain of bacteria in your body. Or a food modified with a toxin designed to kill insects could turn your gut bacteria into a pesticide. These new proteins could also make it into other parts of the body, including potentially a developing fetus.

The studies on animals are alarming enough that most other First World nations require GMO foods to be labeled, or have restricted or outright banned GMOs. The FDA’s own scientists have warned of allergies, toxins, new diseases, and nutritional problems and urged long-term studies. In animal studies GMOs have been linked to:

It can be difficult to find genuine whole foods these days and more difficult still to comprehend the motivations behind the allowance of GMOs in our food supply. The very real threats of GMOs only give us more reason to avoid processed foods. To be safe, avoid risky ingredients, which include soy, canola, cottonseed, corn and sugar from sugar beets. If you have Hashimoto’s hypothyroidism, you may need to be extra cautious so as not to provoke inflammation.

For guidance while you shop, download a non-GMO shopping app to your phone.

Previous: How to prevent a stroke when you have Hashimoto’s hypothyroidism

Next: Skin care from the inside for hypothyroidism: aging, rosacea, psoriasis, and eczema