Why food allergy rates have exploded 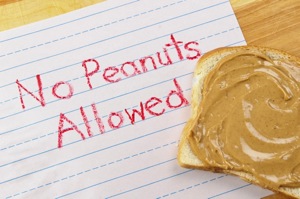 Remember how food allergies were a rarity when you were a kid? Those days are over â€” food allergies have risen 50 percent between 1997 and 2007. Sales of the EpiPen, an epinephrine injection in the event of a life-threatening allergic reaction, rose 76 percent in one year recently.

The reasons for peanut-free flights and nut-free lunch tables at schools have been considered a mystery, but researchers are beginning to find clues as to what may be causing the explosive rise in food allergies.

A previous study by the same researchers also found that removing certain gut bacteria â€” through administering antibiotics â€” from the guts of mice resulted in their developing food allergies.

The results from both studies has researchers raising the question as to whether it is the overuse of antibiotics that has contributed to the sharp rise in food allergies. Most children in the United States receive two or three courses of antibiotics in infancy, with many more courses throughout childhood. Children often receive antibiotics for viral infections, something for which antibiotics are ineffective. This unnecessarily kills off beneficial bacteria in the gut.

It's no surprise that studies show children with food allergies are two to four times more likely to suffer from other  disorders, such as asthma, other allergies, or autoimmune disorders.

The average person carries three to four pounds of bacteria in the intestines. We have trillions of bacteria of many different varieties. In fact, bacterial DNA outnumbers human DNA ten to one in the human body. A healthy, whole foods diet with plenty of plant fiber and  cultured vegetables  helps maintain and grow the beneficial bacteria. Things that can encourage the overgrowth of harmful bacteria include antibiotic use, insufficient consumption of vegetables and fruits, too many processed foods, and excess sugar â€” in other words, the American diet.

Ask my office about how to create a healthy bacteria-friendly diet and which probiotics (supplements that reinoculate your gut with good bacteria) would be best for you.

Previous: Why pregnancy can trigger Hashimoto's hypothyroidism and other autoimmune diseases

Next: How to stick to the autoimmune, or leaky gut, diet