The best form of exercise for aging gracefully 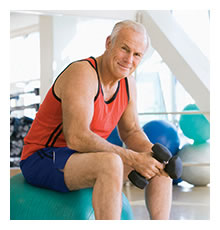 Aging gracefully is all about taking care of your mitochondria — the little energy factories in each cell. As we get older, their function can start to diminish, which plays a key role in aging of the body. However, new research has shown a little-known strategy to boost the longevity and function of your mitochondria — regular bursts of high intensity exercise.

However, when it comes to nurturing cellular mitochondria and thus better preserving your overall health, one form of exercise outshines the rest — intervals of high intensity exercise. This means an exercise routine that boosts the heart rate to healthy upper thresholds for several minutes at a time.

The study divided healthy but sedentary men and women under the age of 30 and over the age of 64 into several groups of exercise:

In other words, interval exercising is the most advantageous at any stage of life, but it’s significantly more advantageous the older you are compared to other forms of exercise.

Researchers theorize interval training is beneficial because it increases the number and health of cellular mitochondria. This means more energy for muscles (including the heart), better brain function, and better recovery and regeneration.

The fact that the older participants had more robust responses to high intensity interval training shows it is never too late to exercise, especially if you do the most beneficial kind. Another bonus? You can extract the most gains in the least amount of time from interval exercise, which requires less time than other forms.

How to interval train for better cellular health

To interval train  simply push yourself to your maximum effort for several minutes several times in your routine, with short periods of rest in between sets. Work within your capacity and don’t over train — over exercising causes inflammation and can damage mitochondria.

Ask my office for more advice on the best way to exercise for optimal health.

Next: Could you be developing digital dementia?