Do you have Hashimoto’s and work out too much? 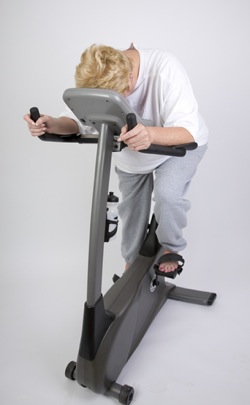 Although it's good to exercise regularly, working out too much could work against you, especially if you have Hashimoto’s hypothyroidism. A new study found that older women (ages 60 to 72) who worked out two to four times a week burned more calories each day and found exercise more pleasurable than those who worked out more.

Past studies have found exercising vigorously almost every day causes some people to be less physically active overall compared to those who exercise less. Researchers suggest constant vigorous exercise sends messages to the brain that the body is overdoing it and needs rest, which may cause fatigue or lethargy. For example, vigorous exercisers may take the stairs less, be more inclined to drive instead of walk, or park close to the entrance of a store instead of traversing the parking lot.

If you have Hashimoto’s hypothyroidism, you may already be struggling with fatigue. Over exercising could make you feel worse rather than better.

In the study, researchers divided the women into three groups who jogged, walked, cycled and lifted weights. One group worked out twice a week, one group four times a week, and the third group six times a week.

Some interesting results emerged from the study. The group exercising twice a week showed the same gains in fitness as the groups who worked out more often. However, the group working out four days a week burned the most calories per day, an additional 225 calories outside of the exercise session.

What is more surprising is the group who worked out six times a week burned 200 fewer calories a day than before they began.

Apparently, the six-day-a-week group suffered burnout. They complained the exercise schedule took up too much of their time and made them feel pressured. As a result, they made lifestyle choices that were quicker but more sedentary, such as driving or taking the elevator instead of walking or taking the stairs.

The other two groups reported feeling more energized and capable. They started taking the stairs over the escalator, walking regularly for pleasure, and incorporating more activity into their lives in general.

In conclusion the group working out four days a week experienced the most benefits, but those working out only twice a week came pretty close.

Of course, if you enjoy working out six days a week and it does not negatively affect you, then there is no need to work out less. Regular physical activity has been shown to lower the risk a long list of chronic diseases, including depression, heart disease, and diabetes.

However, overtraining can deplete hormones, depress immunity, lead to bone loss, increase the risk of injuries, slow healing, increase inflammation, and cause a general feeling of burn-out.

Overtraining causes your body to pump out extra cortisol, a hormone secreted by the adrenal glands that helps us cope with stress. High cortisol can cause bone loss and muscle breakdown, create belly fat, increase sugar cravings, and lead to insulin resistance, a pre-diabetic condition that causes high blood sugar.

Some people who overtrain suffer from low cortisol, which can lead to weight gain, fatigue, low blood sugar (with dizziness, light-headedness, and irritability), muscle weakness, difficulty recovering from workouts, and poor immune strength.

When managing Hashimoto’s hypothyroidism, regular exercise is important to help tame the inflammation and flare ups associated with autoimmunity. However, exercising too much can make inflammation worse and contribute to stress.

Symptoms of overtraining include:

Sufficient recovery between exercise sessions and exercising at an appropriate intensity will get you fitter faster without compromising your autoimmune Hashimoto’s hypothyroidism condition.

Next: Hashimoto’s hypothyroidism: Ten things that cause leaky gut